A simple ambition: That people should feel safe in their homes

Home >> Latest News >> A simple ambition: That people should feel safe in their homes 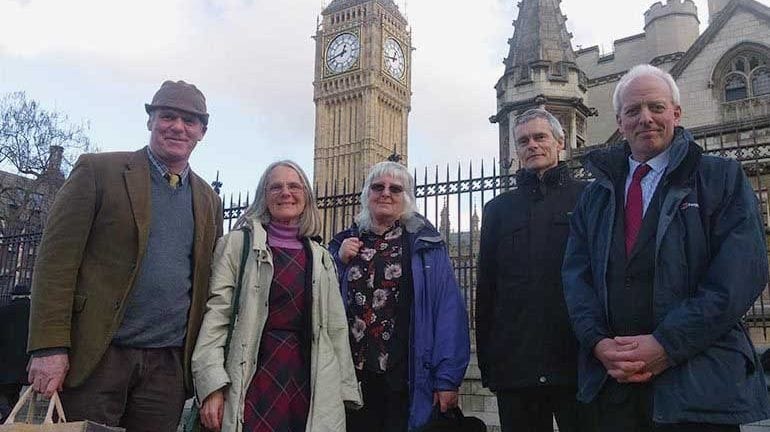 A simple ambition: That people should feel safe in their homes

This week the National Flood Forum was pleased to take a group of residents from Cumbria to present their flooding views and concerns to the Environment Food and Rural Affairs Select Committee (Efra).

The six residents from Flood Action Groups across Cumbria, joined forces to present an honest account of how flooding affects people’s lives and the challenges and opportunities they believe need to be tackled.  They spoke openly and honestly with MPs, Neil Parrish, the Chair of the Committee, Jim Fitzpatrick, Deputy Chair and David Simpson.

The issues they raised included the impact of flooding on lives and livelihoods, the need for local voices to be heard and acted upon, the ambition required to tackle flooding in the future, the need for a county-wide emergency plan, improved land management and the challenge of planning and development in the face of increased flood risk.

After the meeting the group also met with Sue Hayman, MP for Workington and newly appointed Shadow Environment Secretary, to discuss their views.

Members of the group spoke to ITV Borders, BBC Radio Cumbria and other radio stations after the meeting.

John Kelsall, Chair of the Carlisle Flood Action Group said: “We feel very remote in Cumbria, we’re a long way from London and the sources of funding.  We hear a lot about funding going into the south east, which is why it’s important we make sure Cumbrian voices are heard in Westminster.”

Paul Cobbing, Chief Executive of charity, the National Flood Forum said: “We wanted people from Cumbria to be able to speak directly to MPs and express to them exactly how they feel.  It’s easy to turn the impact of flooding into numbers and technical analysis after a flood event, but actually, the important thing is about people and how they feel.

“The trauma they still feel now, let alone when the floods happened, is all too real.  People are still putting their lives back together.  They’re dealing with issues a year later and are trying to confront the flood risk issues they face in Cumbria.  This is the same for flooded communities up and down the country.”

Speaking about the meeting in Westminster, John Kelsall added: “I think the visit to the Select Committee went very well and the Chair was keen to hear what we had to say.

“We raised our concerns about government and Environment Agency reports that seem to start from the position that the flooding [we experienced] was caused by climate change.  Whilst we recognise this as an issue, we also told them that poor maintenance of rivers and watercourses, a loss of understanding of river management and the management of land around rivers should also be factored in very seriously and could create quick wins.”

Paul Cobbing continued: “The MPs were receptive and were in listening mode.  They were also interested in some of the planning issues that were being put forward in relation to flooding.  It’s now up to them how they use our information and feed it into government.   It was a great opportunity for communities to speak directly to people in power.”

John Kelsall finished by saying: “I extended an invitation to the EFRA committee to come up to Cumbria to see the impact first hand.   I hope our visit will make a difference and we will see some improvements, not just for ourselves in Cumbria but also the rest of the country because it’s about forming a national strategic approach to managing flood risk.  That’s what needs to be discussed and that’s what government needs to understand.”

Paul Cobbing summed up with the National Flood Forum’s view: “I think we need to impress upon people the level of ambition required to tackle this.  Very often there is little understanding about the impact of flooding on people’s lives, but the bottom line is that this is about making sure people can feel safe in their homes.  Surely that’s an ambition worth sharing.”